Vascular Malformation of The Cheek and Lip 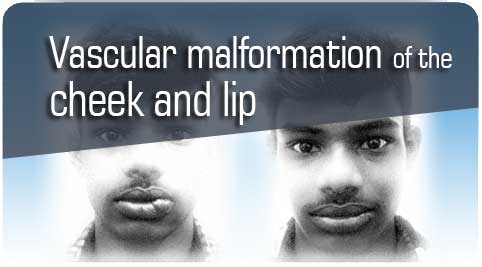 Vascular Malformation of The Cheek and Lip

Umesh, a 19-year-old boy from a village nearby came to the OPD of Richardsons Dental and Craniofacial Hospital with a reddish-blue swelling of his lower lip and left cheek since his childhood. It has reportedly grown in size marginally. Upon examination, it was preliminarily diagnosed as a capillary vascular malformation.

A CBCT scan was done for the patient which revealed no significant hard tissue abnormality.

A vascular malformation is a benign tumor of abnormally formed blood vessels with a risk of significant bleeding if tampered with. Umesh was diagnosed to have a low flow lesion which posed minimal chances of serious bleeding if treated correctly.

Since this tumor was causing facial deformation of the patient it was planned to surgically excise the tumor. The procedure was performed under local anesthesia and was completed in one hour. The patient was discharged in two days with minimal facial swelling. He has been visiting us for two months now and he looks completely normal and has no scar on his face.