Richardsons Dental and Craniofacial Hospital is Internationally recognized for the successful treatment of cleft lip and palate. It is one of the premier institutions in treating patients with cleft lip and palate. Cleft lip and cleft palate treatment are usually done by a facial plastic surgeon trained in craniofacial surgery. Famous Maxillofacial Surgeon Dr Sunil Richardson has unparalleled experience and expertise in the repair of patients with clefts.

Dr Sunil Richardson is one of the best cleft lip surgeons in India. His results are at par and better than most cleft centres of the world. His team is also always producing excellent results for cleft palate patients. Patients from not only Kerala, Tamil Nadu and corners of India come here for treatment but also from various countries of the world.

Dr Sunil Richardson is a Visiting Professor to the plastic surgery department at Stanford University, California, USA. He also has a license to work out of the middle east. He is a consultant at Starcare Hospitals at Muscat, Oman near Dubai.

OCCURRENCE OF CLEFT LIP AND PALATE IN INDIA

It is generally believed that about 1 in every 700 live births is born with a cleft lip or palate. India has a huge population of 1.35 Billion people, with the second most populous nation in the world. Therefore, India also has a huge number of kids born with cleft lip and palate. It is estimated that around 30,000 kids are born with clefts every year. According to the World Health Organization, this accounts for nearly half of all craniofacial deformities.

WHAT IS CLEFT LIP AND PALATE?

Cleft lip or hare lip is the second common birth defect affecting humans. This happens due to the incomplete formation of the lip/palate during the first few weeks of pregnancy. A cleft is a lack of continuity. When its there on the upper lip on one side, it’s called the unilateral cleft lip. When it’s on both the sides, it’s called the bilateral cleft lip. Likewise, when there is a gap in the hard palate and /or the soft palate, it’s called a cleft palate. Again, it could be unilateral (one-sided) or bilateral (two-sided). Genetics plays an important factor.

CLEFT LIP AND PALATE IN CHILDREN

Children could be born with a cleft lip and palate. Or they could have an only cleft lip or only cleft palate. The width of the cleft and the associated deformity also varies. Sometimes, the cut could be on one side of the lip or both sides of the lip. Some cleft kids also have a cleft of the alveolus, the tooth-bearing porting of the upper jaw, cleft alveolus.

Prevalence of cleft lip and palate varies among races. The Asian population would have one of the highest. The African population would have the lowest prevalence. However, with abortion, a lot of these kids with clefts are now increasingly terminated. India has a high prevalence too, about 1 in 700 kids are affected with cleft lip and cleft palate.

UNILATERAL (ONE SIDED) OR BILATERAL:

Oblique facial and Tessier type clefts – These are rare congenital craniofacial clefts that extend beyond the lips and palates and involve the eyes, face, cheek and even the forehead.

Genetic Factor: Genetics plays one of the most important roles in cleft lip and palate. Various genes are responsible for the same, some of them are TGFα(8), TGFβ3(14,15) and transcription factors like MSX1, IRF6, TBX22

Consanguineous Marriages are also known to cause cleft lip and palate. It refers to marriages made between close relatives. Such marriages should be avoided. In India, these practices are seen among certain communities only. Education and Advice should be given.

Cleft lip and palate are even known to occur due to stress. Iron deficiency, folic acid deficiency and iodine deficiency are also some known causes.

Exposure to certain infections and viruses like measles during early stages of pregnancy is also shown to have caused cleft lip and palate. The mother’s health is paramount and is one of the reasons for cleft formation. Smoking, drugs, alcohol consumption and certain drugs taken by the mother during the early pregnancy can cause these cleft lip and palate.

At Richardsons Craniofacial Hospital, we use the following internationally proven best practices.

In certain cleft lip and palate cases, should be done on babies1-2 weeks old. This reduces the width of separation and brings the lips to close together, making it much easier and better for the surgery to follow. An orthodontist trained in this treatment is with the craniofacial team at Richardsons.

Should be done when the kid is between 9 and 10 months old. The philosophy is that normal palate must be restored before the kid starts to babble or start to speak. This generally happens around 10 months.

This procedure is done in cleft kids around 4 to 5 years of age ( not all ) when the alveolus or the tooth bearing bone is narrow. It can be combined with bone morphogenetic protein.

This BMP is used in some patients that need it. The advantage is that bone harvest a be avoided. However, the surgery must be done at an earlier stage. Also, the incurs an extra cost for kids with cleft lip and palate.

Done on some kids when cleft alveolus is wide. On these cleft lip patients, bone is harvested from the iliac crest and placed in the cleft alveolus. Best done around 8 years of age. These make the nasal base even. It also creates a nice smile for these kids with cleft lip and palate in India.

Our Speech and Language pathologist assesses all cleft lip and palate kids speech at 3 years of age. Do note that most of our patients done need Speech therapy.

Our Orthodontist aligns the teeth in a perfect manner. It’s usually around age 12. Again not all kids with cleft lip and palate need this. Mal aligned teeth are aligned, missing teeth are replaced and impacted teeth are removed as well. Fixed Orthodontics or braces treatment is done to close space and arrange the teeth.

Some kids whose upper jaw doesn’t grow as well as lower jaw need this procedure. The best treatment for this is Anterior Maxillary Distraction. It brings new bone in the upper jaw of cleft lip and palate patients. It improves speech, and there is no relapse. It can be done when the kid is 12 years or so. Again, only a few patients need this.

This is usually the last treatment done to re shape the nose. It is done patients with cleft lip and palate who have slightly bent nose. Can also be done for noses which are not symmetrical. It is also done for patients who can have blocked nose. Either open structure rhinoplasty or closed approach is used. The cost and recovery varies based on the treatment done. The results are permanent and lifelong. This removes any cleft stigma and gives a nice normal shape to the nose. It can be done after 15 years of age. If done earlier, it is called anterior rhinoplasty. In younger ages, only the soft tissue is adjusted for cleft lip kids.

Pharynx refers to the throat. These type of throat surgeries used to be done in years before for speech improvement. But, it should not be done. Various literature from numerous studies has shown the drawback for this technique and procedure. This Pharyngoplasty causes lots of breathing and sleep issues for patients. At Richardsons, this procedure is not done for over a decade now, yet producing beautiful normal speech. There are other simpler yet better alternatives now available including the modified Furlows and Buccal flap which are used when needed here for cleft lip and palate kids.

WHAT IS CLEFT LIP SURGERY?

Modified Millard’s technique is used to correct unilateral cleft lip. Mulliken’s type repair is done for bilateral cleft lip. Surgery is done under general anaesthesia with Paediatric Anesthesiologist. Not only is the normal form of the lip restored but also it is scar less, here in the best hospital in India for cleft lip and cleft palate treatment. The most important factor to be considered is the experience and the expertise of the cleft surgeon. The first surgery if done perfectly, solves all problems for the kid, for life.

WHAT IS CLEFT PALATE SURGERY?

Radical Muscle Dissection and Two Flap Palatoplasty techniques are used. Palatoplasty is the name for cleft palate surgery. It is best done before 10 months of age of the cleft kid. The entire gap in the roof of the mouth will be closed in one stage. A perfect repair is needed for normal development of speech. Hence proper muscle repair and tension free perfect closure is mandatory. An expert experienced surgeon is a must for this fine yet major surgery. 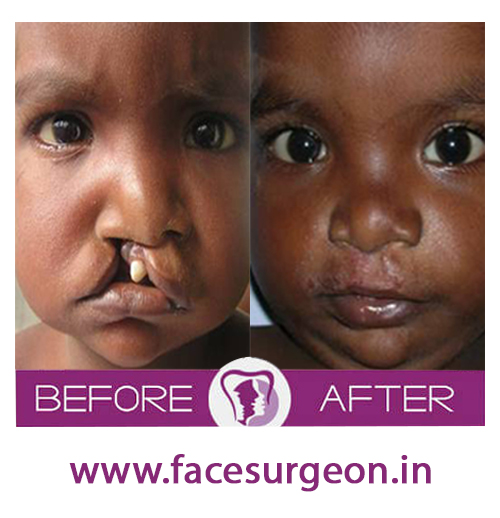