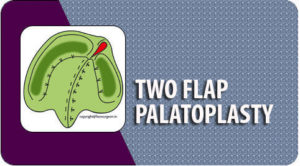 It is very important to know the clinical outcomes of primary palate repair as it is the foundation on which depends the growth and speech of the child. A study was done in our hospital (Richardson’s dental & craniofacial hospital) on 1184 patients affected by cleft palate. These patients were treated by a technique is known as two flap palatoplasty technique. The patients were followed-up and seen for the incidence of fistula formation, speech difficulties and the effect of this technique on a restriction of growth of the upper jaw.

All the patients were followed up for a minimum period of 5 years. The results of our study showed a less number of patients with speech defects (only 14.8% of the total sample) and all of these patients were treated for primary cleft palate defect. Usually, the children need an intact palate by the age of 18 months to produce definite speech sounds. Surgical repair of the cleft palate defect before 9 months of age leads to higher incidence of restricted upper jaw growth in the later life and also does not contribute to an improvement of speech. Through this study, we concluded that cleft palate repair should be done between 9 to 12 months of age to achieve optimum speech development at a later age and also to minimize the retarded growth of the upper jaw.

Through this study, we concluded that two-flap palatoplasty is an excellent technique for correction of cleft palate repair. Careful muscle dissection and correct timing of surgery can reduce the rate of complications and give the patient a reasonable speech with minimal growth interferences. Our study was published in the journal of cleft lip palate and craniofacial anomalies in the year 2017. The link to the article is shared below.