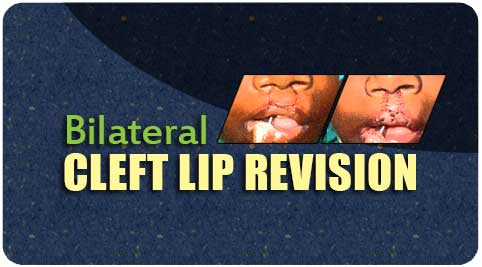 Frequently we get patients who come with complaints of scars on the upper lip who have had surgeries elsewhere. These form the so-called secondary cleft lip revision surgeries and we specialize in these types of surgeries here at Richardsons dental and craniofacial center.

Saniya, an eight-year-old girl had a bilateral cleft lip revision which was repaired at the age of three months at a nearby city’s corporate hospital. She came to us now with a prominent scar on the lip and mal-alignment of the red and white lines of the lip.

Lip revision surgery was done for her under general anaesthesia. The excessive scar tissue was excised and the symmetry of the lips was established. The lip shape that is more natural was created. The philtral column was narrowed. The width at the nasal base was reduced and the tip lifted up a bit by increasing the length of the columella. The uniformity of the thickness of the lip was also achieved. Very fine sutures were used to suture the incision lines so that no scar is formed again.

No matter the age of the type of primary cleft lip or palate surgery, these patients can still be revised and made beautiful here at Richardsons Dental and Craniofacial Hospital.