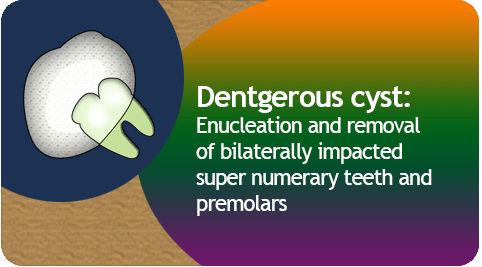 Various complications associated with the presence of supernumerary tooth are failure of permanent teeth eruption, crowding, ectopic eruption displacement, root resorption, dilaceration, loss of vitality of adjacent teeth, dental caries, periodontal abscess, gingival inflammation, subacute pericoronitis, incomplete space closure during orthodontic treatment, and pathological problems such as Dentigerous cyst formation, Ameloblastomas, Odontomas, and fistulae. In planning the treatment alternatives for impacted supernumerary premolars, the potential risk of leaving them in situ and hazards of surgical removal of these teeth especially around the lower premolar region, where the teeth are close proximity to inferior dental and mental nerves and blood vessels should be assessed judiciously.

The timing of surgical removal of a supernumerary premolar is as much debated among clinicians as are treatment methods. Whenever these teeth are associated with any pathological formation or when hinder eruption of or give rise to malpositioning of permanent teeth, they should be removed as soon as possible. If left in situ, a periodic examination is recommended for their clinical behaviour.

A 13 yr old patient reported to our hospital (Richardson’s dental and craniofacial hospital) with a complaint of retained deciduous teeth. On routine radiographic examination impacted supernumerary teeth and premolars were found beneath the retained deciduous teeth along with a well-circumscribed radiolucency on both sides. The association with impacted supernumerary teeth and the radiolucent changes gave the direction of the lesion most probably being a cystic lesion. The impacted supernumerary teeth, premolars and the retained deciduous teeth were removed surgically. The impacted premolar on one side was very proximal to inferior alveolar nerve and it was removed without causing any damage to the nerve bundle. The associated cystic lining was enucleated and sent for histopathological examination. The post-operative recovery of the patient was uneventful.