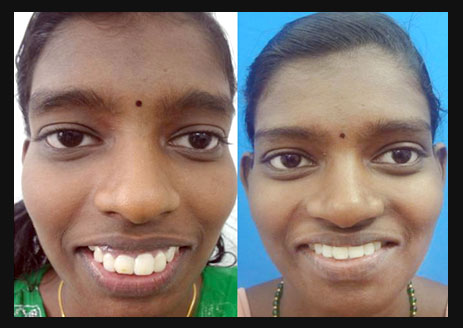 If you’ve described your smile as Gummy smile it usually denotes a facial disharmony. Excessive gummy smile/excessive gingival display means that during a social smile, more than normal amount of your gums/gingiva are visible. Usually, 1-3mm of your gums should be visible during a social smile whereas in a full smile about  5-7mm of the gums can be visible. If more gums are showing during the smile it can mean a few things:

Not every person with a gummy smile warrants treatment. For example’s sake,we could actually consider Julia Roberts face characteristically attractive because of the gingival display. It’s a subjective decision, although getting treatment would improve the harmony of the face and overall musculoskeletal balance of the face.

If you have concerns about your excessive gummy smile, it’s first important to get yourself checked by your doctor to understand which of the above-stated causes is the reason for your excessive gummy smile. It usually requires some clinical examination in the doctor’s clinic and a radiograph or a scan. If it is your tooth length that’s a problem, it can be lengthened by what is called a crown lengthening procedure usually done with electrocautery or laser. If your upper lip is the cause then either lip lengthening procedures or procedures on the upper jaw are needed. If however, your upper jaw is at fault, you would need either orthodontic treatment or orthognathic surgery.

Orthodontic treatment is a camouflage treatment and can be done for mild cases only. For moderate to severe cases of gummy smile orthognathic surgery is the treatment of choice.

Here at Richardson’s dental and craniofacial Hospital, Dr.Sunil Richardson has treated several such cases and has expertise in this field. The surgery is performed under general anesthesia. The upper jaw is detached from the rest of the skeleton and made to move up by a desired numerical value that is calculated from the patients’ radiographic study and from his dental casts. Thereafter the jaw is fixed in its new place with the help of bone plates and screws. Healing takes about two weeks during which time it is advised to have soft food. Full bony healing would take a couple of months. The results are usually very stable.

Here’s an eighteen-year-old patient who came to us with her complaint of an excessive gummy smile. We evaluated her clinically and radiographically and concluded she needed orthognathic surgery. We performed a Le-Fort1 setback and impaction on her which took her upper jaw upward and backward. Her postop results were very satisfactory. Her treatment was finished with some orthodontic corrections and finishing. See the wonderful results for yourself!