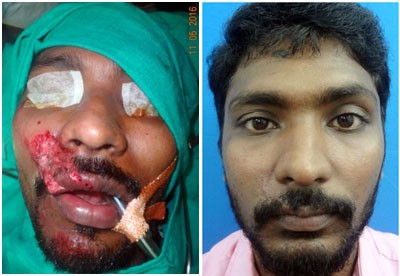 One of the most indispensable skill set of a maxillofacial surgeon is required for facial trauma cases. Simply put, trauma is a physical injury which can be due to various reasons, most commonly road traffic accidents, physical assaults, sports injuries and so on. We get to see a wide variety of injuries related to such cases which can be as bad as someone losing their vision to something as minor as an abrasion on the face.

Is each case a prototype of another? No!

The pattern of these injuries depends on a multitude of factors like the speed of the vehicle, direction of the collision, whether or not a seat belt was worn at the time of accident, etc. And so in our practice, we would barely ever encounter two trauma cases which are identical. However, the basic principles remain the same for all: RESTORING THE NORMAL FORM AND FUNCTION like before as much as possible. It can be either in a single surgery or in staged procedures with separate and meticulous attention to be given to both the soft tissues..like the cheeks and lips and the hard tissues like the bones and teeth.

Recently we had a 27yr old young boy whose motorcycle skidded down the road and he suffered multiple injuries with a severely lacerated upper lip and an avulsed central incisor. When he came to us we ensured that his vital functions were first stabilized before we started any other sort of intervention for his injuries. Once that was done, we repaired his lip wound which needed attention before we would do something about his missing tooth for fear of infection to that wound..he recovered very well over the next couple of days..and then we were faced with a decision of treating his central incisor. We provide with options like removable dentures, bridges, and DENTAL IMPLANTS. While the former two are also considerable options, yet they are more easily passed as being a ‘prosthesis’ whereas a dental implant can be more readily accepted as a natural tooth replacement, although it is also a prosthesis. And so we decided to place a dental implant for him within 5 days from the day he lost that tooth. The final prosthesis was given about 3 months later. He left a happy boy with a minimal scar and with a good set of teeth (who would know which one was the dentist’s doing!).