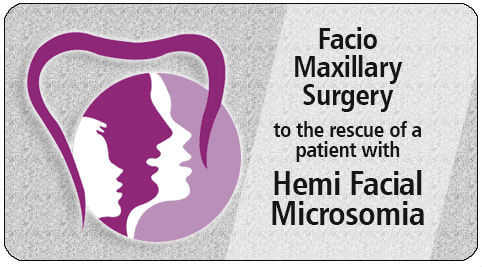 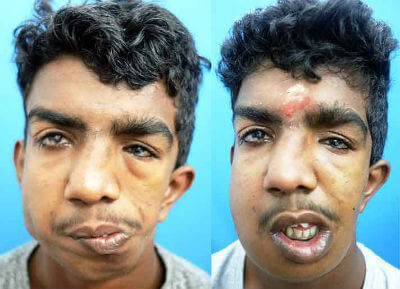 Many children all over India are born with a birth defect called Hemifacial Microsomia. In hemifacial microsomia, one side of the patient’s face has growth retardation. Other than affecting the jaws the disease also affects the eyes, the ears, the nerves supply of the face. The patients are usually very under confident and shy because of their appearance. On such patient named Gokul visited our center, he is around 17-18 year old and has hemifacial microsomia. He wasn’t happy with his facial appearance and wanted to change the same.

He approached Dr. Sunil Richardson and discussed his issue. All the initial investigations were done, we took a CBCT scan for him and studied his facial bony profile and decided to do an Orthomorphic surgery for him. Orthomorphic surgeries are a rather newer modality of treatment routinely practiced here at Richardsons Dental and craniofacial hospital. The surgery is faster compared to the conventional Orthognathic surgery & the patient recovery period is quicker as well. The surgery for Gokul took around 2 hours after which he was kept under observation for a few hours. Gokul was put on a soft diet the very next day after the surgery and had a full recovery.

Orthomorphic surgery is a newer advanced treatment modality, wherein the occlusion or the bite of the patient is maintained ever after the procedure. It is useful in cases of hemifacial microsomia, TMJ ankylosis and many others where only certain dimensional changes are required in the lower jaw.  Post surgery the patient usually has the full recovery and can take normal diet. For Gokul this is the first step towards changing his appearance, however, there are many Gokuls out there who need to be reached out to, thus making the world a better place for them as well. We at Richardsons dental and craniofacial Hospital believe that the newer advances in the field must be incorporated into our practice so as to keep up with the ever advancing world thus giving our patients world-class quality of treatment.