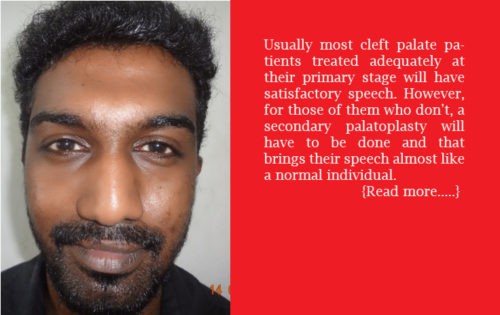 Furlows Palatoplasty : Usually, most cleft palate patients treated adequately at their primary stage will have satisfactory speech. However, for those of them who don’t, a secondary palatoplasty will have to be done and that brings their speech almost like a normal individual.

We had an adult male patient(32yrs) walk into the clinic one day accompanied by his brother who said that no one could comprehend his brother’s speech. We found that he had a repaired cleft palate and in-spite of that his speech was hypernasal and incomprehensible. We performed a perceptual speech evaluation on him as well as a lateral videofluoroscopy was done and he was confirmed to have velopharyngeal incompetence.

Dr. Sunil Richardson decided to perform a Furlow’s Palatoplasty procedure which ensures that the muscles of the soft palate which help in the formation of the velopharyngeal seal important for the production of sounds are placed in their correct orientation. Also, this procedure lengthens the soft palate which again helps forms this seal. The surgery was performed at the Richardson’s dental and craniofacial hospital and was done under general anesthesia. A double opposing Z-Plasty and complete dissection of the muscles of the soft palate was done so that they could be reoriented to their correct transverse orientation. Primary closure was done of the 4 flaps created. Postoperatively, the patient was instructed to follow good oral hygiene measures and have a soft diet for a few days. He was discharged in two days. Along with speech therapy, his speech is almost normal now and people around him can understand everything he says.

Little attention paid to technique at the time of surgery can provide the patient with a nearly normal life. Even if the primary palatoplasty could not attain proper speech goals, treatment like the furlows palatoplasty exist which are secondary procedures that give the patients a chance to have normal speech.