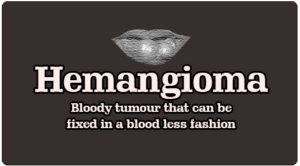 Why did the patient come to Richardsons Craniofacial Hospital?

This patient was referred to Richardsons Hospital to consult with Dr. Sunil Richardson by a plastic surgeon from a nearby city in Tamilnadu, South India. She had a tumor in the lower lip that was causing a lot of concern for her. She also had a history of surgery almost a decade ago, that resulted in ICU stay and lots of bleeding at another hospital. That episode had made her and her parents not want any more face hemangioma treatment for the same. However, this plastic surgeon had convinced them of the large number of patients being treated at Richardsons and referred them here.

Hemangioma or sometimes also called as arteriovenous malformations (though technically they can be distinguished on histopathological examination ) is a tumour that is primarily of blood. It can affect the lips, tongue, cheek, neck or any other part of the head and neck region. During infancy, it can be managed medically, after years in a lot of cases, some surgery is needed. This girl also had recurrent bleeding episodes during to some minor trauma to the lips from time to time.

What was planned in face hemangioma treatment?

After MRI angiogram and Cone beam CT scan evaluation along with all the blood tests, it was decided to surgically remove the lesion in toto under general anesthesia. While the lesion was to removed completely so that it wouldn’t recure, Dr. Sunil Richardson also ensured that it would cause any cosmetic disfigurement.

How was the face hemangioma treatment performed?

The Surgery was performed with the help of laser, cautery, and knife. Various types of suturing techniques were employed as well to reduce intra operative bleeding as well. The patient stayed over at the hospital for a couple of days only. Later on, she came for a review after a week.