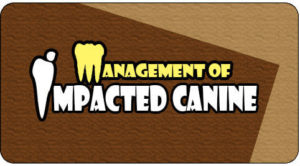 The word impactus in Latin means pushed against. An impacted tooth is the tooth which is completely or partially unerupted and is positioned against another tooth or bone or soft tissue so that its further eruption is unlikely. Impaction of maxillary and mandibular canine is a frequently encountered clinical problem. There are many causes for impaction of canine teeth. Some of the reasons contributing to this condition are trauma to the deciduous tooth bud, a delayed rate of resorption of the deciduous tooth, disturbance in tooth eruption Sequence, rotation of tooth buds  Some secondary causes like Abnormal muscle pressure, Febrile diseases, Endocrine disturbances, Vitamin D deficiency also contribute to impaction of canine teeth. A genetic component is also evident in some cases as seen in cases of familial and bilateral occurrence. Impacted canines also occur with increased frequency in cases of reciprocal dental associations such as the ectopic eruption of first molars, infra-occlusion of primary molars, aplasia of premolars and third molars. The impacted canine is most commonly classified as occurring labial, palatal or mid alveolar i.e the impacted teeth being situated in the middle of the alveolar bone. Each patient with an impacted canine must undergo a impacted canine tooth treatment.

There are several sequelae because of the impacted canine teeth. Some of them are migration of neighboring teeth and loss of arch length, Internal resorption or external root resorption of an impacted or neighboring tooth, Dentigerous cyst formation, Infection particularly with a partial eruption, Referred pain. The management of the impacted canine teeth varies according to their position and prognosis. Those impacted teeth which are favorably positioned and having good prognosis are brought into the dental arch by using orthodontic brackets. Those teeth which are causing pressure on the adjacent teeth and causing resorption, those teeth which are positioned unfavorably and are having poor prognosis are removed by surgical extraction. As canine teeth are considered as cornerstones of the dental arch and are the most important teeth in the patient’s smile, these impacted teeth with reasonably fair to good prognosis are tried to be preserved as far as possible.