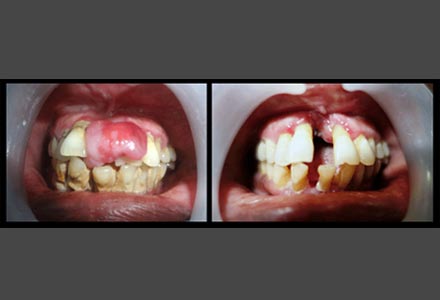 Gingival overgrowth treatment in India is a common clinical finding, with most cases resulting from plaque-related inflammatory gingival disease. Conservative tissue management and plaque control are usually effective in these cases. However, a small fraction of them is different, and while they likewise represent a reactive tissue response, they arise at the level of the periodontal ligament’s superficial fibers. These epulides form below the free gingival edge rather than because of inflammatory gingival overgrowth. This aetiopathogenesis differentiates this group of lesions in terms of clinical appearance and behaviour, as well as their proclivity for recurrence if not treated properly. To promote dental awareness in India, Richardson Hospital provides the best epulis treatment in India as well as completely affordable dental check-ups.

Gingiva is also known as the gums. Localized Gingival enlargement can cause swelling over the upper and lower arches, or simply in a specific area. Gingivitis is a generalized swelling, whereas an epulis is a swelling that is restricted to a single area.

The most common variety of epulis is a pyogenic granuloma, which appears in the front gums and partially obscures the teeth in that region. It might happen because of physical trauma, oral plaque, calculus, or infection. It has a bloody appearance and can bleed when brushed. Except for larger lesions where considerable blood loss is feared, which can be treated by first injecting sclerosing or fibrosing agents and then excising the lesion, the treatment is usually surgical removal in its entirety.

A front gingival epulis was suspected to be a Pyogenic Granuloma in this case. A 45-year-old diabetic patient came to Richardsons Dental and Craniofacial Hospital with a 6-month-old swelling on her anterior gums that was obscuring her front teeth. A bright red growth measuring about 1*1cm was seen linked to her anterior maxillary gingiva during testing. Her dental hygiene was awful. Dr. Sunil Richardson planned to give her a full oral prophylaxis/scaling before performing an excisional biopsy. To avoid excessive bleeding, the excisional biopsy was performed using electrocautery under local anaesthesia. The results of the biopsy confirmed our preliminary diagnosis of pyogenic granuloma. On subsequent visits, there have been no symptoms of recurrence. The best epulis treatment in India is done by Richardson dental Hospital.

Richardson dental clinic specialists are highly qualified and prepared to deliver the best dental treatments, such as cavity filling, dental implants, orthodontic therapy, root canal treatment, and other reconstructive surgical techniques. The clinic’s dentists are trained to assess your dental health and recommend the most appropriate tentative treatment plan, which may include a long-term or short-term treatment.

Richardson Dental Hospital specializes in performing basic oral epulis treatment in India using the most up-to-date equipment. The clinic’s additional treatments are quite reasonably priced, and they provide a variety of payment options.

The finest feature is the clinic’s location, which is conveniently accessible from the train station, by road, or by air. Patients are given the best treatment possible, and the greatest level of hygiene is maintained. The hospital aspires to make dental care affordable, accessible, and available to all. They strive to deliver the highest quality treatment at an uncharacteristically low cost by leveraging the highest level of training and development to achieve the best results.