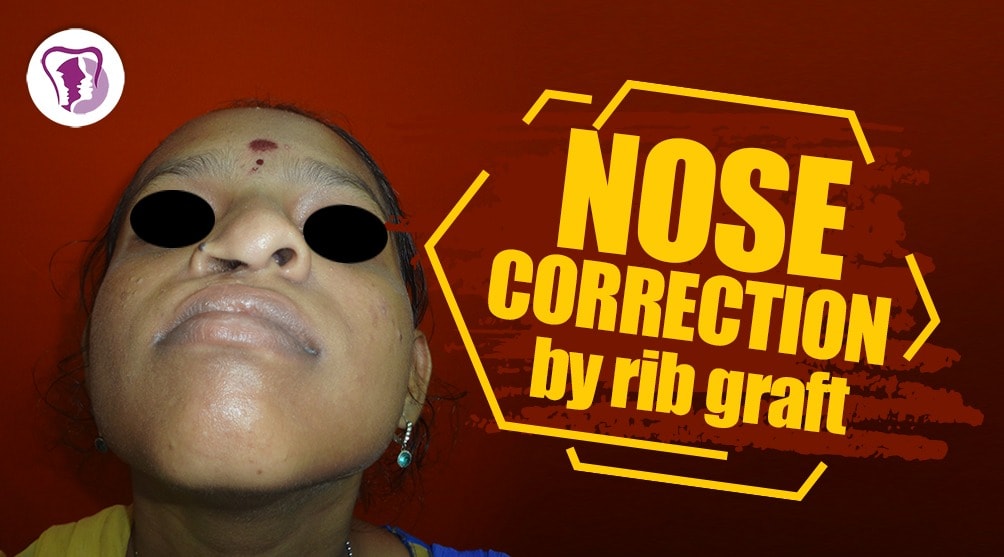 The anomaly of cleft affects not only the lip or the palate alone but the nose is involved too. Due to the improper orientation of the muscles, the nasal structures are distorted resulting in esthetic and functional issues. The most common cleft nasal deformity is the depressing part of the nose involved on the cleft side along with a flattened nasal bridge. The nose plays an important role in the appearance of an individual, and thus in cleft patients, it is often compromised.  The cleft lip and palate conditions are treated quite early in a child’s life, however, nose correction surgery by RIB graft is done at different ages depending on the growth of the individual and their need.

A 14yr old girl, who was an operated case of cleft lip and palate wanted to improve her nose.  Her nose was flat, and depressed on one side. And now that she to move out of her school soon for higher studies, she was quite apprehensive about the shape of her nose and thus reported to Dr. Sunil Richardson for the correction of the same.

Clinical examination and radiographic evaluation were done to identify the areas of the problem. So she was planned for Rhinoplasty Surgery, with the aim to correct the depressed side of the nose and also the flat nasal bridge. To give a shape to the flat nose, a graft had to be placed. So a costochondral rib graft was harvested in the same surgery. The required amount is taken and placed in the deficient part of the bridge. It was secured, and now her nose was not flat anymore.  The depressing part of the nose was corrected too.

Her hospital stay was for a week, to settle the swelling and stabilize the graft. Post-surgery, her looks improved, no flat or depressed nose anymore! She couldn’t believe it herself. Her parents are also happy because the donor site is from her own rib. This gives the best results in nasal augmentation. There was no pain or any discomfort reported by her.

At Richardson’s, every cleft individual is followed up. All the required interventions are done to make them live life like anyone else.