Almost everyone from our generation knows about Harry Potter and his adventures. I take the liberty of claiming that the most creepy character according to me in the Harry Potter adventure land will always be the ‘one who should not be named’, the Dark LORD VOLDEMORT. What I found most creepy and borderline scary about him was his nose-less face. Imagine not having a nose. What’s the next worse thing to not having a nose?? Having a deformed nose!! The nose is the most prominent feature of the face; it’s the first thing we look at when we notice someone. Having a twisted nose or broad or deformed nose is a nightmare for most people, isn’t it? Dhanush walked into Richardsons dental and craniofacial hospital this morning with a complaint of having a twisted nose, he seemed to be very frustrated by that fact. He approached Dr. Sunil Richardson and requested him to help him get rid this as Dhanush said ‘horrendous nose’, he said he was tired of people looking at his nose instead of looking into his eyes. This problem was big enough to make him travel all the way from Hyderabad to Nagercoil. Dr. Sunil Richardson decided to do nose plastic surgery and hence put an end to his miseries. 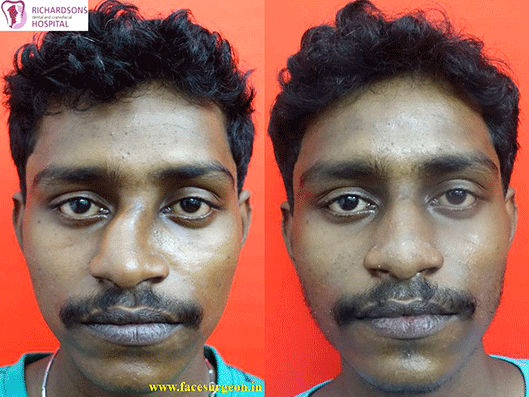 A pre-surgical workup for nose plastic surgery was done. Thorough clinical examination, a series of nasal scans and all the routine investigations were performed after which Dhanush was shifted to the operation theatre for his surgery. We performed anesthetic rhinoplasty for him. An open structure rhinoplasty procedure, as well as a tip plasty and a dorsal augmentation, was performed. An intricate surgery performed in a span of fewer than 2 hours. A nasal splint was placed and the patient was shifted to the post-operative room.

A number of Dr. Sunil Richardson procedures are being done here at Richardson’s dental and craniofacial hospital. Building a pretty nose is the goal we try to achieve. Dhanush remained in our care for a couple of days after which he was ready to go home. He was pretty satisfied with his new nose!! He called Dr. Richardson a few months later telling him about how he is a much more confident person now and how he enjoys this new experience of people looking him into the eyes and talking to him. Dhanush seemed to be in love with his new nose. It made all of us here at Richardson’s Hospital very happy. Dr. Sunil Richardson has cast his spell on DhanushandLUMOS is what he says!!! Adios Amigos!