Nosejobs or open rhinoplasty for patients with cleft lip 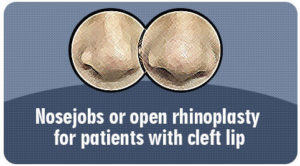 Nosejobs or open rhinoplasty for patients with cleft lip

Cleft deformities come with a variety of associated defects. A patient with cleft lip and palate will more often than not have an associated nose deformity as well. The nose may have deviated, twisted deformed, wide or unshapely. The nose being the most prominent feature of the face requires special attention in all terms. The patients suffering from a cleft nasal deformity need to be treated for cleft rhinoplasty. The nose can be first treated at 5-8 years of age where primary correction is rendered followed by the next surgery after 15 years of age because by this time the nose structures have fully grown and thus correction is permanent.

One such patient reported to our centre to get treated for his nose deformity. She was previously treated for cleft lip & palate as a child. She had undergone various cleft-related surgeries. She was around 17 years of age at the time of this visit.  Her nose was drooping and she had no nasal tip support. She complained that her nose was flat and shapeless. Dr Sunil Richardson examined this patient and decided to go ahead with an open structure rhinoplasty. A battery of tests was conducted and after a full workup, the patient was treated under General Anaesthesia … Very fine sutures were used to close the incisions, a nasal splint was placed as well so as to maintain the shape of the nose.   The entire surgery time was around 1-1.5 hours and the patient had full recovery postoperatively. She was discharged from our care after 4 days

The main challenge in treating cleft nasal deformity patients lies in the fact that the nasal anatomy is distorted, the overlying skin and cartilages are malpositioned and also the substance is deficient. In some severe cases where there is very deficient tissue, we prefer to harvest a graft so that we can augment the nasal septum better. The graft is usually taken from the rib, we also use spreader grafts, alar batten grafts, columellar struts are also being harvested at our centre.

We believe that the nose is the most important part of the face and also the most prominent feature as well. It dictates the structure of the entire face. Entire justice must be done while treating a case of cleft rhinoplasty as we believe that a well-structured nose will serve not only as a confidence booster and also instil confidence in our patient. She will be able to relate better to our social standards of beauty, making her a happy patient.