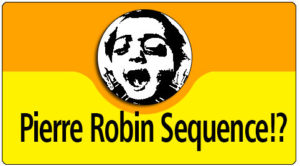 1 in every 8000 to 1 in every 30000 live births are estimated to have Pierre Robin syndrome.  It affects babies all over the world. So…

What is Pierre Robin Sequence syndrome?

In 1932, a French doctor described this syndrome as a congenital disorder affecting babies of both genders equally. The child has a smaller than normal lower jaw, a tongue that obstructs the airway and a cleft palate. These children will have difficulty in breathing due to airway obstruction and thus making the condition fatal & requiring urgent care.

One such patient has been operated in our hospital around four years back & has been in regular follow-ups. She was born with Pierre Robins syndrome. She also had a cleft palate, glossoptosis and a smaller than usual or hypoplastic mandible.

We realized that the child had severe breathing issues and hence decided to do a lower jaw distraction procedure. We had to bring the lower jaw forward in order for her to breathe properly.

After pre-surgical checkups for general anesthesia, we started the surgery with an osteotomy or sectioning of bone. Following that, we placed the distraction device under the skin across the bony cut. After, a few days the two ends of the bone are very gradually pulled apart by means of a screw of a key present on the exterior surface at a rate of 1 mm per day. This gradual distraction leads to the formation of new bone between the two ends. After the process is complete, the osteotomy or bony cuts are allowed to heal over a period of six to eight weeks. We then performed a minor second surgery to remove the device.

We achieved a distraction of approximately 22 ms of new bone in the lower jaw. Thus, bringing the lower jaw forward and relieving the breathing problems. We also repaired the cleft palate surgically.

The patient has remained in our follow up for more than 4 years now. Her mandibular position has improved and she speaks very well too.

Pierre Robin syndrome though a rare disease, requires surgical treatment as these children are more prone to airway collapse and thus leading to the condition being fatal.

Our Expertise speaks it all:

Here at Richardsons dental and craniofacial hospital, we treat many babies affected with this disorder and they are in our long-term follow-up as well. These children require a long-term therapy as they grow up, while some may require a second osteotomy procedure too.