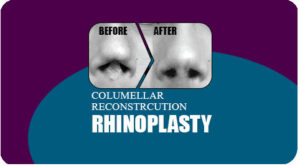 The columella is one of the key elements of the aesthetics of the nose’s tip. Etiologies for columella loss of substance have different causes. The columella has been proven to be one of the most complex nasal subunits to reconstruct. Many solutions have been suggested for reconstruction of the nasolabial columella complex. In our hospital (Richardson’s dental & craniofacial hospital), columella reconstruction for a case with Total columellar loss has been done with the help of an edge nasal flap. An 11-year- old girl came with a complaint of total columellar loss. She has been previously operated for the same condition four years back, but the surgery was not successful. Thus she need Reconstruction Rhinoplasty.

Clinical examination showed a complete defect of the columella with collapse and widening of the nostrils. Columella reconstruction by an edge nasal flap was therefore planned. The surgical procedure was performed under general anaesthesia. The flap was raised with a width of 3mm at the two-thirds proximal end of the nostril. A transfixing incision was made to the nostril edge. The flaps were elevated, pedicled on the nasal tip, and a primary closure was done for donor sites. The mucosa of the nasal septum was incised vertically and decollated on each side of it. The nasal edge flaps were translated and sutured medially together in front of and behind in continuity of the septum. An antibiotic dressing was given.

Thus reconstruction was made in a single surgery with a minimal flap design. No complications occurred and the flaps survived completely. The result obtained was very good and the patient and her parents are very happy.

All types of cosmetic surgeries for facial cosmetic deformities including Reconstruction Rhinoplasty, orthognathic surgeries and scar revisions are being done at Richardson’s dental & craniofacial hospital, India, by Dr.Sunil Richardson & his team.