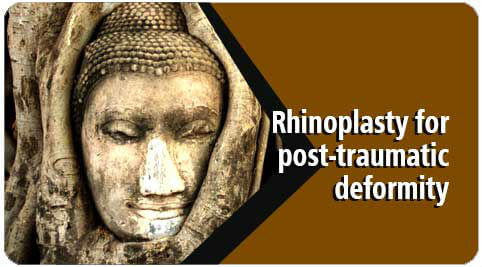 Traumatic injuries to the nose can occur due to contact sports, interpersonal altercations or due to road traffic accidents. These traumatic injuries frequently lead to damage of the bone and cartilage support, and change the appearance of the nose, resulting in deviations, asymmetries and sometimes airway problems. These injuries can be treated by Rhinoplasty surgery.

A patient named Kumar(Name changed), aged 31 years male came to our hospital (Richardson’s dental & craniofacial hospital) with a complaint of an irregularly looking nose. He had a previous history of trauma, facial wounds due to a bike accident. His case was typical with the nasal tissues being attached to upper lip as a result of suturing the nasal and upper lip tissues together. As a result of the previous suturing, the length of the upper lip was also reduced, and the tip of the nose was depressed due to attachment to the upper lip. Careful separation of his nasal tissues and excision of excess scar tissue from his upper lip was carried out. This was followed by repositioning of the nasal tissues to their original position and suturing the nasal tissues and the upper lip to their appropriate positions. This procedure improved the appearance of the nasal tip. The postoperative appearance of the patient was much improved and the patient is very happy after seeing the result. Thanks to Dr.Sunil Richardson