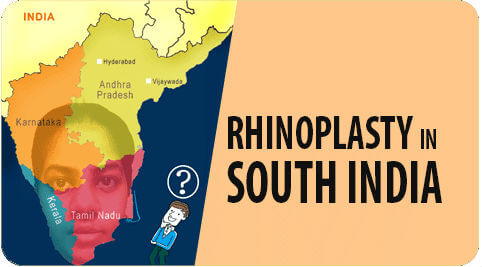 Beauty arises from symmetric, balanced, and harmonious proportions of facial parts. The growing demand for rhinoplasty in south india clearly reflects the importance of a beautiful nose. Because the nose is the most prominent part of the face, nasal parameters are the most important determinants of the attractiveness of any face. The typical characteristics of an Indian nose are a little wider alar base in general, acute nasolabial angulation, less pointed nasal tip. The acute nasolabial angulation and the less pointed tip together make the Indian nose look less projected from the face than the whites.

The acute nasolabial angulation can also be attributed to the smaller length of the upper lip in Indian population compared to other races. A more prominent dorsum can be created in the Indian population by augmentation with cartilage.

An open structure rhinoplasty is performed and cartilage harvested from the patient’s ribs is chopped into fine pieces and placed over the nasal dorsum to increase its prominence. In some cases, osteotomy on either side of the nasal dorsum is required to shape the dorsum to the desired shape.

A pressure dressing is placed over the nose for one week which acts as a splint to help the cartilage settle down and adaptation of the new shape of the nose. The projection of the tip can be increased by placing cartilage or Medpore and suturing in its position. Patients are closely monitored for one week and kept on medications before they are discharged. The changes in their nose structure can be appreciated by the patients when all the swelling subsides.