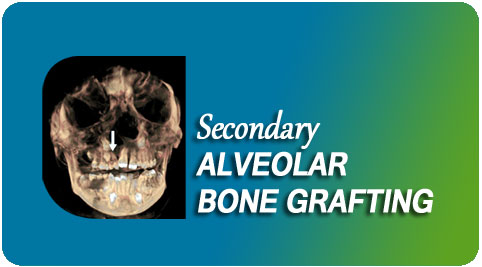 Secondary Alveolar bone grafting Treatment : Good tooth alignment and dental arch form is something that greatly contributes to facial beauty and function. Children born with cleft lip and palate also have clefting of that portion of the upper jaw that houses teeth of the canine region. Unless this gap is filled up, it is unlikely that the canine would erupt in its correct position hence preventing a good arch form, shape and a discontinuity in the arch.

Abhay had his cleft lip surgery as a child. He looks like any other boy and noone can even tell that he may have had a cleft lip problem. However on a closer look, you can see that on his cleft side there is some depression in the upper lip,his nasal base is lower on this side and inside his mouth this region of his jaw is depressed. He came to us when he was about seven years of age which is the apt time to correct this problem called cleft alveolus.

A Cone Beam CT scan was done for him at Richardsons dental and craniofacial center which helped in diagnosing the extent of the cleft alveolus and hence guided the amount of bone that would be required for filling up the defect. He was wheeled into the OT at about 4 pm. Healthy bone was harvested from his left hip bone and filled in the defect after being mixed with platelet-rich plasma.

Platelet-rich plasma is a component of the patients own blood that is rich in growth factors which help in the faster healing of wounds.

His surgery took about 45 mins. He was discharged three days later and had resumed oral diet. He had no troubles walking. A year later, his dental arch/jaw looks well aligned without any depression. His new Cone Beam CT scan shows how well new bone has bridged the cleft.