Treatment for a flat face in cleft lip and palate patients.. 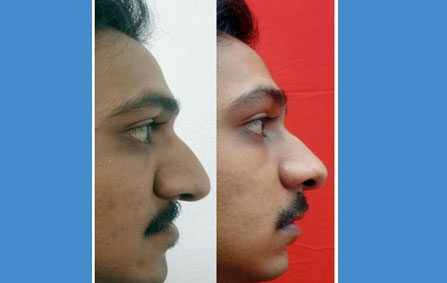 Treatment for a flat face in cleft lip and palate patients..

Very frequently cleft lip and palate patients come to us with a complaint of a flat face, more particularly flat cheeks. This is because in cleft lip and palate patients the growth of the midface fails to keep pace with the growth of the lower face giving a flat appearance to the cheeks and a protrusive appearance of the chin. A young boy of about 18yrs of age came to us with such a complaint. We reassured him that such a problem is completely amenable to treatment and he can have a normal appearance and lead a completely normal life. We took a CBCT scan for him which is beneficial as the radiation dose is just a fraction of what it is for conventional CT scans. The scan revealed that his upper jaw was backwardly placed as compared to the lower jaw and had to be brought forward to achieve a pleasing profile.

Dr.Sunil Richardson having vast knowledge and expertise in treating such cases opted for Anterior Maxillary Distraction. It is a technique which produces new bone between a cut that is given in the bone and hence allows for the forward positioning of the jaw. The surgery took place in Richardsons Dental and Craniofacial Hospital and was done under general anesthesia. The anterior region of the jaw was cut and suspended with a screw appliance. After a healing period of five days, the screw was turned by four turns twice a day which roughly achieved 1.4mm anterior movement of the upper jaw per day. A total of 10mm forward movement was attained for the patient and that gave him a pleasing profile. This procedure is safe and reliable as chances of relapse are minimal. The gap created between the teeth is retained by placing a prosthetic appliance. Being a minimally morbid surgery, if performed correctly causes no discomfort and maximum output for the patient. The patients get a full rounded appearance to the face without the need for any bone grafts or implants with minimal chances of relapse.