Cleft Children Can Be Normal… 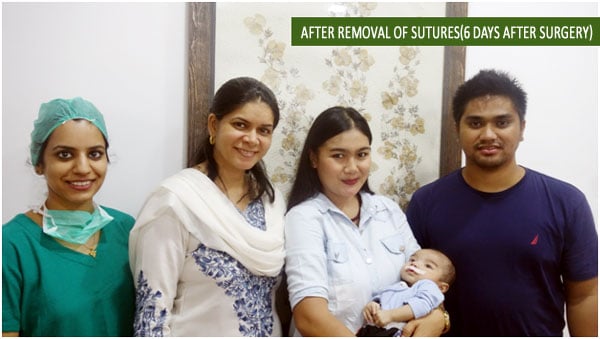 Cleft Children Can Be Normal…

Babies who are born with a cleft lip and/or palate require specialized care from a multidisciplinary team of medical specialists. Approximately one in every 700 babies are born with one or both of these birth abnormalities, making it one of the most frequent birth defects in the world. Because of the challenging medical, surgical, dental, and social issues, their care must be effectively managed. Thus, Richardson hospital provides supreme treatment for Baby cleft lip palate surgery in India.

Everyone at Richardsons Dental and Craniofacial Hospital was delighted to meet the Indonesian family who had travelled from Medan to have their son’s cleft lip and palate surgery. This surgery took place when he was just three months old. A large unilateral left-sided cleft lip, alveolus, and palate were discovered by Dr. Sunil Richardson during a physical examination. The mother had conducted considerable research on the best cleft and craniofacial institutes in the world before deciding to bring her child to this facility for treatment in the end.

In Kerala, they arrived at Trivandrum International Airport (which is only 68 kilometres from the hospital), which is well connected to other parts of the world and serves as a gateway to the rest of the world. After spending two days in the hospital, they were allowed to go sightseeing in the surrounding area. Aside from the beaches, Kanyakumari, India’s southernmost tip, is known for its spectacular sunsets and sunrises. Padmanabharpuram palace, which is only 15 kilometres from the hospital and served as the administrative centre of the old Travancore kingdom, is presently the largest wooden palace in India and is the largest in the world. They were pleasantly surprised by the variety of foods available in this section of the country. They were especially impressed by the warmth of the place, which included the hospital. They also heard a lot about our hospital as the best baby cleft lip repair in India.

Even though the baby’s recovery after Baby cleft lip palate surgery in India was a complex procedure, he was eating and engaging in his usual activities within a few hours of the procedure. Following the removal of the stitches, they were allowed to leave the hospital after only six days of recuperation time had passed. They were delighted by the service of Baby cleft lip palate surgery in India provided by us. We wish them the best of luck, and we look forward to seeing them again in a few months for the baby’s palate surgery.

Take a look at these baby cleft lip palate surgery before and after photos below: