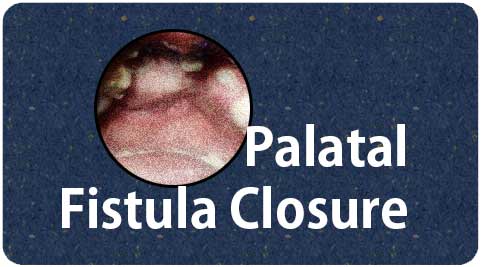 A 10 years old patient named Sreesiva came to Richardsons dental and craniofacial hospital with a chief complaint of a hole in the palate and thus having regurgitation of fluids and food from the nose. On clinical examination, there was a hole in palate called anterior palatal fistula in medical terms and it was the result of previous cleft palate surgeries which the patient had undergone a few years back in another hospital.

The Palatal fistula was of a large dimension and this usually happens due to the inefficient operation has done primarily. He also had a badly operated upper lip with a scar and a retruded midface. As the chief complaint of the patient was the regurgitation of fluids and speech, the fistula repair was planned first, to be subsequently followed by operations for lip revision, the anterior maxillary distraction for retruded maxilla and rhinoplasty.

Closure of fistula was done in two layers, the first layer was made from the ill-formed tissue of the fistula and the gingival margins everted and were sutured. The second layer was made with the help of buccal myomucosal flap taken from one side of the cheek and was covered over the formed nasal layer and sutured. The flap was completely taken up by the body and the fistula closed with no residual fistula. Three weeks later a detachment of the flap and lip revision was done.

Use of a buccal flap, although is a delicate and technique sensitive procedure, it made it possible to close such a large defect in the palate which could not have been possible by ordinary measures. The patient will now be recalled every week for speech therapy to further improve the speech of the patient.