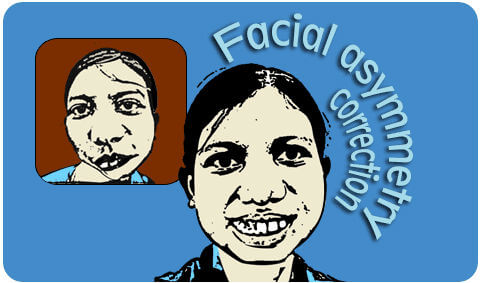 Thousands of children suffer from medical neglect, some for financial reasons some due to lack of awareness about treatment options of the parents/guardians. One of our dearest patients was a young girl of about 10yrs, who was deaf, dumb, had trouble walking and also suffered from a condition called temporomandibular joint(TMJ)  ankylosis.

What is TMJ Ankylosis?

It is when the joint responsible for opening and closing of our mouth gets fused and the patient is unable to open his mouth. It can either occur in one or both the jaw joints.

For this young girl, the ankylosis was of her left side. It not only gave her trouble in opening the mouth but due to the fusion of the left joint, the jaw of that side was restricted in its growth. This caused the right side of her jaw to overgrow in comparison and lead to a severe facial symmetry with her face skewed to the left side.

Unaware of all the problems, the parents had not approached any doctors for treatment and had accepted her condition as it is. Dr.Sunil Richardson, fortunately, spotted her in her school event and decided to help out this girl.

Cone beam CT scan was done for her and it was found that her left jaw joint was fused and the left side of the lower jaw was much smaller compared to the right side.

Hence it was decided that Distraction Osteogenesis would be done for the patient first to correct the facial asymmetry.

What is Distraction Osteogenesis?

It is a surgical technique in which new natural bone is formed from within the existing bone. Hence bones can be lengthened to the desired amount and normalcy can be attained.

For our patient, the left side of the jaw was lengthened by 35mm and this restored her facial symmetry. It took about a month to achieve it as the appliance used for distraction needs to be turned twice a day to bring about the stretching of the bone to induce new bone formation.