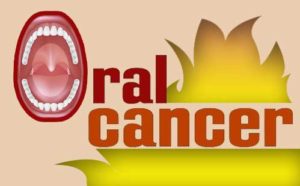 The most dreaded oral disease is oral cancer. Although it can be a fatal disease, yet if detected at the right stage it can be curable and the patient can lead a normal life. Here’s a story of a patient who came to the OPD of Richardsons Dental and Craniofacial Hospital with no hope, having already been diagnosed with oral cancer elsewhere.

Dr.Sunil Richardson did a complete examination and found him to have oral cancer of his right cheek region. Fortunately, cancer had not progressed to the advanced stages and was fairly localized to within his mouth. It was a 4.3cm ulcerative growth of his right cheek. The lymph nodes of his neck were not involved. A CT scan was also ordered to confirm the clinical findings. Dr.Sunil Richardson decided to perform surgery for the patient after ascertaining all his general health parameters like blood reports and vital signs were within the normal range. A team of surgeons performed complete excision of the lesion with wide margins and also performed a partial resection of his lower jaw on the right side.

The lower border of the right lower jaw was left intact as it was uninvolved and would help maintain the shape of the face and hence would not disfigure the patient. The right side of the neck was opened to clear the draining lymph nodes as well. The defect on the face and mouth created, required coverage which was provided by harvesting a chest muscle flap called the pectoralis major myocutaneous flap. It is a robust flap which gives good tissue bulk to preserve contours of the lost structures. After a long OT, the patient was kept in the ICU for two weeks. During this time, his nutrition was closely monitored and charted to make sure that he received adequate carbohydrates, proteins, and fats in the correct proportion for good recovery after a major surgical procedure.

After two weeks, he underwent another minor surgery to remove a part of the chest flap and retain only that part that was needed for defect coverage. This muscle was also covered with a skin flap taken from his thigh in the same surgery. This skin muscle part was his extra-oral cheek defect coverage. He received regular dressing changes and cleaning to make sure that his flap was healthy and viable until it completely got integrated. After a month of hospital stay, he finally left for home, free of his disease. He came to us regularly for follow up despite staying 1000kms away from Richardsons Hospital. His wound has now completely healed, his right arm functions are normal and he eats and talks normally. He has gained about 7 kgs of weight and has rejoined his work. 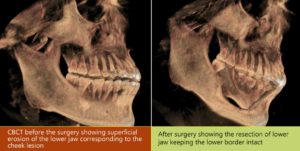 CBCT of oral cancer treated at Dr Sunil Richardson dental and craniofacial Hospital Nagercoil Tamilnadu India. Like him, there are many more who can be saved at the right time if they seek help at the earliest. Not every cancer kills if not allowed to!