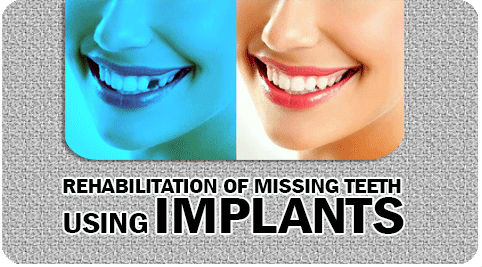 Rehabilitation of missing teeth using dental implants is a part of cosmetic dentistry. Cosmetic dentistry has grown very much in the recent years, both in aesthetic and functional aspects. Implants placement for the rehabilitation of missing teeth is one such option which has seen a tremendous growth in the last two decades. The advantage of the implant supported replacement of missing teeth is that their function is similar to the natural teeth. These implants are made up of a material called titanium which is biocompatible and fuses with the adjoining bone by a process known as osseointegration. This allows the replaced teeth to bear the forces generated during chewing just like the natural teeth.

With minimum precautions, these replaced teeth are said to last for a lifetime. Another advantage when compared with the removable teeth is the lack of need for removing at the night time and cleaning them separately. It also has an advantage when compared to the fixed partial denture because it need not involve the adjacent teeth for support, as it derives its support from the bone in the missing tooth area. The teeth replacement for the implant-supported prosthesis is given over the structures known as abutments which serve as support structures joining the implants and the replaced teeth. The prerequisites for a successful delivery of an implant-supported prosthesis is a good quality of bone in the missing tooth area and sufficient space for the delivery of the prosthetic teeth between edentulous space and the opposing tooth and sufficient mesiodistal space in the missing tooth area.

Apart from this proper and regular diet control & exercise to maintain blood glucose levels in case of diabetics, cessation of smoking and maintenance of good oral hygiene play an important role in the success of implant-supported prosthesis.

Patient with missing teeth on both sides of her lower jaw came to our hospital (Richardson’s dental & craniofacial hospital). She was an ideal candidate for implant placement with good quality of bone and sufficient space for the rehabilitation between the opposing teeth and the area of missing tooth. Four implants were placed for her in the missing tooth area in the lower jaw on both sides. The surgery for placing the implants is a very minimally invasive procedure and no postoperative sequelae were recorded. Replacement of the missing teeth will be done after four months when the process of osseointegration is completed.