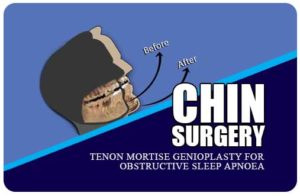 Obstructive sleep apnea (OSA) is the most common type of sleep apnea and is caused by complete or partial obstructions of the upper airway. It is characterized by repetitive episodes of shallow or paused breathing during sleep, despite the effort to breathe, and is usually associated with a reduction in blood oxygen saturation. These episodes of decreased breathing, called “apneas” (literally, “without breath”), typically last for 20 to 40 seconds. Obstructive sleep apnea (OSA) is a condition that significantly affects morbidity and mortality and has substantial social implications related to the workplace and in motor vehicle accidents. In addition to causing excessive daytime sleepiness, obstructive sleep apnea has been associated with medical co-morbidities, which include pulmonary hypertension, right-sided heart failure, nocturnal hypoxemia, cerebrovascular accidents, cardiac arrhythmia, and systemic hypertension. Surgical treatment for obstructive sleep apnea is indicated when the respiratory disturbance index is more than 20 with oxygen desaturation less than 90 percent. Genioplasty is a type of surgery done on the chin.

Uvulopalatopharyngoplasty (UPPP) procedure was performed when the anatomic obstruction exists at the level of the soft palate. When anatomic obstructions exist at the base of the tongue as well as the level of the soft palate, combined surgical procedures offer higher overall success rates than UPPP alone. Genioglossus advancement was achieved using a tenon – mortise type of genioplasty. The goal of this osteotomy is to achieve volumetric expansion of the hypopharyngeal space via the advancement of the genioglossus muscle. The minimum advancement achieved was 10 mm. Lateral fixation of the fragments was done to avoid the risk of fracture. This method of mortised genioplasty for genioglossus advancement long with UPPP serves as an effective method for patients with mild to moderate obstructive sleep apnea.