Cyst of the upper jaw/maxilla 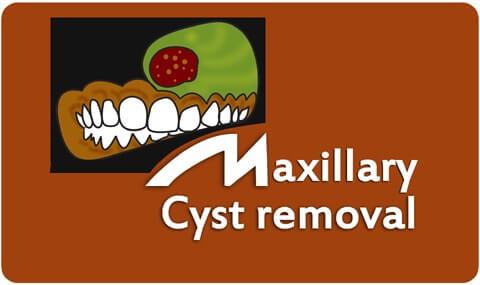 Cyst of the upper jaw/maxilla

Maxillary cyst removal Surgery : Tanya, aged 15/f came to the OPD of Richardsons Dental and Craniofacial Hospital to get the two small bulgings above her incisors of the left upper jaw checked.

Her history was fully elicited by Dr.Shreya Krishna, Assistant Surgeon, and Dr.Joe Berlyn, the Dentist, to find out that she had pain and swelling associated with her two upper incisor teeth of the left side since two months for which she had visited a local dentist. They advised her to undergo root canal treatment of the two teeth followed by placing a crown/cap over the teeth, assuring her that the infection was only of the teeth. However a week after completion of that treatment, two bulges appeared again in the gums of that region. That is when Tanya decided to meet Dr.Sunil Richardson.

He examined her and suspected it to be a bony cyst that had developed due to the infected tooth and that would have been present even before the root canal procedure of the teeth was done. A cone-beam CT scan was done for Tanya to confirm the clinical diagnosis. The scan showed a 2*2 cm sized cyst in relation to the two left upper incisors in the upper jaw which had expanded the bone of that region and had caused the bulging. It was decided that for the benefit of the patient and all the cost they had already incurred for previous treatment and crown placement, the treatment would not involve removal of the crowns or extracting the teeth, in fact the cyst would be completely removed surgically (enucleation) from an intra-oral approach without any external incision, and from a retrograde approach.ie the teeth would be left intact, only the apex of the tooth would be freed of the disease.

The cyst was enucleated in toto and the biopsy confirmed the diagnosis of a cyst. Her crowns are intact and there has been no change in her appearance, just disease-free. its beauty in and out!