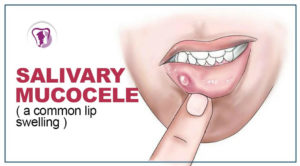 How does a mucocele form ? how mucous cyst treatment has been done?

The Saliva comes from salivary gland through tiny ducts. One of these ducts can become damaged or blocked and when this happens mucus seeps out becomes walled off and causes a cyst like swelling. This swelling initially appears very small and usually keeps on increasing with time. Some times. due to trauma, it may rupture on its own only to reform a few days later.

Mucocele presents as a harmless swelling generally less than 1 centimeter in the inside of lower lips the gums or underneath the tongue. They are soft round dome-shaped, clear to Bluish in color. Result of the injury or damage to the lips in your mouth:  due to lip biting or sucking for direct trauma can cause mucos cyst to appear.

The young man had reported with a small swelling in his lower lip region which was present for over a month. He had history of continuous lip biting. The swelling was painless but it kept gradually increasing in size. He reported to Richardson dental and craniofacial hospital for the treatment of the same. The patient was explained about the identity of the lesion and the procedure planned. A simple office-based local anesthesia procedure was performed. The mucocele was carefully excised in toto and was submitted for histopathologic examination to rule out any other condition. The surgical area was closed using fine sutures so as to maintain the integrity of the lip.

It is important that mucoceles are removed carefully in toto without damaging the associated structures maintaining the tissue integrity and lip esthetics. Incomplete removal may cause recurrence. This mucous cyst treatment has done under local anesthesia.